I have been asked if I offer classes in reading Tarot. Or if I plan on doing so, have I designed my own deck, will I be expanding into other aspects of running a ‘Mystical Business‘ or adding a Blog to this site. One of the hardest lessons this Leo Sun, middle child, Moon conjunct Ascendant in Sagittarius had to learn was adapting to the physical reality of my current incarnation. The quick answer to the above string of questions is “No plan for that this year.” 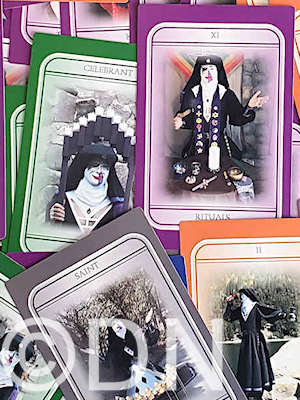 I have agreed to help market The Tarot of Sister Who. Designed for personal spiritual growth rather than divination or prognostication, I do use it for specific spreads, as listed in the Catalogue section.

Now that I’ve undergone my first cataract surgery, I’ve resumed my long-stalled study of Astrology. But reaching a point of comfort to offering chart analysis is unlikely to be this calendar year. I am far too much a novice at numerology, runes, or other practices to offer them as separate services for the foreseeable future.

Although my personal blog (Deep Within I Know I’m Free) has a large number of posts, it is is 11 years old. I’m not able to honestly commit to a specific posting schedule. Adding another blog here is just not in the cards. Instagram is perhaps the best site to keep updated on my activity.

Thinking of learning to read Tarot for yourself? I’ve compiled a short list of cards and books that may help. Although many people start with The Rider Tarot Deck

(also called Rider-Waite or Rider/ Waite/ Smith) I strongly recommend the Morgan-Greer Tarot. The imagery is very similar, but with slightly updated and refined artwork that I prefer. The artwork in the Sacred Rose Tarot deck, which I also use, has more intense colours with fewer, larger, details that some might prefer while others find distracting. There are dozens hundreds of other designs offered; many using Rider Deck based imagery and its arrangement of Major Arcana titles.

Using different decks all based on the standard 78 card arrangement may be easier than adding other kinds of decks to your repertoire early on. Other kinds (‘oracle’, ‘divination’ or ‘spiritual’ decks) have unique card names, images and suggested interpretations. While valuable tools in their own right it is important to understand what purpose their designers had in mind. I use the three First Nations decks listed below, as well as two D.Virtue Oracle Decks I was gifted last year.

The Complete Guide to the Tarot by Eden Gray, is a Kindle version of a classic book that’s a great introduction to the Tarot. In fact Ms Gray’s three books introduced the Tarot to generations of card readers, any one of them a great resource for folks interested in Tarot philosophy in the early to mid 20th Century.

Power Tarot and The Creative Tarot are newer additions to my library, but I highly recommend each title. The first of those is now about 20 years old, but is a great introduction to the cards as well as being packed with “more than 100 spreads that give specific answers to your most important questions.” The second book is just a few years old. It was written for Artists, with some very focused spreads. I use spreads from both; see the Catalogue section. Volume 1 of The Encyclopaedia of the Tarot is for those who really want to get a feel for the history of Tarot.

As an Amazon Affiliate, I will earn a small referral fee if you make a purchase from following any links. Some Browsers and Operating Systems don’t display the following widgets- most items are linked through text above.

The Digital Gryphon LLC is the business entity behind my various creative endeavours.

@ RubberChickenMinistries.org offers a range of rituals from various faith traditions to honour your ‘cycle of life’ events. I am licensed to solemnize marriages by the State of Ohio.