How Does Tarot Work?

I do not believe in fate or destiny in the sense that the future is predetermined. However, we are creatures of habit, influenced by our personal & cultural histories and our biology; with varying levels of self-awareness. So can we really exercise ‘free will‘?

Keeping with the nautical theme of the quote pictured here; waves tend to rush to the shore but break-walls and winds (i.e. forces seen and unseen) may change the direction or speed of those waves. We, and existence in this reality, are complex.

I have owned and used Tarot (and other ‘oracle decks’) for 40 years. I’ve also studied astrology and keep a small number of crystals around my work space. At their best, so-called ‘divination tools’ (whether cards, crystals, astrology, numerology, runes or any other method) help us see what lies beneath the surface and may help us understand patterns in our thoughts and behaviours.

Am I saying that anyone can read cards? Yes. To some degree. Anyone can paint, or sing, fix a leaky faucet or learn what childhood patterns continue to influence us. Most of us can’t do everything at an expert level. If you are interested, I have a list of suggested decks and books to begin your journey learning how to read. However, should you wish to bypass decades of studying- the cards, the universe around us, the ones within us- perhaps my experience doing those things can be of assistance.

My view is that a Card Reading, like an attentive therapist (regardless of specialty, theory or paradigm) should present questions rather than answers. Hopefully ones that help you discover the answer you already know, and not a koan*. Or as noted astrologer Steven Forrest put it, “modern astrologers predict questions, not answers” (The Changing Sky, 1986, Bantam, p.xiv)

Various ‘occult traditions’ have spoken of vibrations, and energy; quantum physics is just starting to grasp the truths behind those concepts. Perhaps the cards help us tap into Carl Jung’s collective unconscious* collection of archetypes and information. Some describe it as “intuition” while others say “muse“. Or maybe Dolly Parton had it right in her song ‘These Old Bones‘ that the magic is inside each of us. 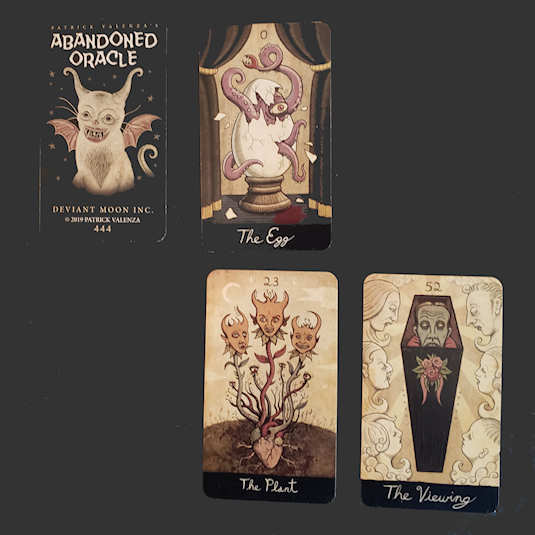 *Collective unconscious:
“there exists a second psychic system of a collective, universal, and impersonal nature which is identical in all individuals. This collective unconscious does not develop individually but is inherited. It consists of pre-existent forms, the archetypes, which can only become conscious secondarily and which give definite form to certain psychic contents”
Carl Jung, The Archetypes and the Collective Unconscious

Insight:
“the act or result of apprehending the inner nature of things or of seeing intuitively”
From Merriam-Webster

Intuition:
“the power or faculty of attaining to direct knowledge or cognition without evident rational thought and inference”
From Merriam-Webster

Koan:
“a paradoxical anecdote or riddle, used in Zen Buddhism to demonstrate the inadequacy of logical reasoning and to provoke enlightenment”
From OxfordDictionaries.com

Synchronicity:
“the coincidental occurrence of events and especially psychic events (such as similar thoughts in widely separated persons or a mental image of an unexpected event before it happens) that seem related but are not explained by conventional mechanisms of causality —used especially in the psychology of C. G. Jung”
From Merriam-Webster.

A Very Brief History of Tarot 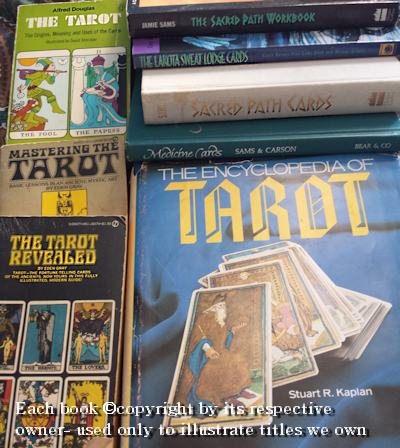 Various writers, teachers and explorers of esoteric arts (magic, wicca, magick, Golden Dawn, etc) have claimed that Tarot cards are repositories of ancient wisdom- with origins from ancient Egypt through various parts of Asia. While I believe that much of ‘Western’ religious tradition most likely descends from Ancient Egyptian traditions, I suspect that solid evidence of it is lost to time and/or the bowels of the Catholic Corporation archives. What we do know is that decks of cards were being used across Europe by the Romani and others for fortune telling, as well as Tarocchi, a card game. The oldest cards still in existence are from the 15th Century- generally produced for members of the Visconti families in what is now Italy.

Perhaps one of the best discussions of the history of Tarot decks is the 300+ page, heavily-illustrated, The Encyclopedia Of Tarot, Vol. 1, shown in the attached image. This is the first of four volumes* (so far) written by Stuart R. Kaplan who founded US Games Systems Inc to publish and distribute Tarot and other decks of cards. The book lists European references to playing cards as far back as the 1300s. He then presents early tarocchi decks, modern tarock decks, and of course the Occult Revival interest in Tarot as a divination tool.

In many earlier decks (as well as some recent designs) the numbered cards of the Minor Arcana showed just the number of items (eight cups, three swords, etc.) reminiscent of what’s found on modern playing cards. Designs created by members of various occult groups such as Theosophical Society and Hermetic Order of the Golden Dawn and published in the 19th Century included detailed illustrations on all the cards. The Rider-Waite deck designed by A.E. Waite (artwork by Pamela Colman Smith) and published by Rider & Company had perhaps the greatest influence on the meanings, designs and order of cards in most designs produced since.