Tarot Decks
A specific form of Oracle Cards, with some traditional structure and meaning but also great variety of styles and details. Decks are generally structured as 78 cards; a Major Arcana (suit) of 22 cards plus four Minor Suits, each consisting of cards numbered one to ten, plus four ‘court cards’. Exactly how far from this basic structure, traditional names or typical imagery a designer may stray and still be considered a Tarot deck is a matter of personal taste or belief. There is no legal definition. 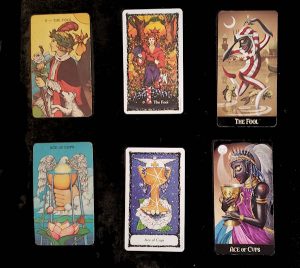 My Core Tarot Decks:
Left to Right: Morgan-Greer; Sacred Rose; Deviant Moon.
The top row shows that deck’s version of card 0 The Fool; underneath each is that designer’s version of the Ace of Cups.

These 3 decks are my ‘go to’ for Tarot readings; I generally use Morgan-Greer but if another speaks to you, just let me know. 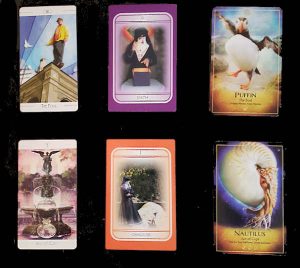 My Secondary Tarot Decks:
Left to Right: Urban Tarot; Tarot of Sister Who; The Ark Tarot.
The top row shows that deck’s version of card 0 The Fool; underneath each is that designer’s version of the Ace of Cups.

The first deck has some ‘Thoth deck’ influences, and is particularly suited to readings for queer city-dwellers. The 2nd is designed for contemplative meditation rather than divination. The last is a new deck, filled with rich animal imagery and we are still connecting. 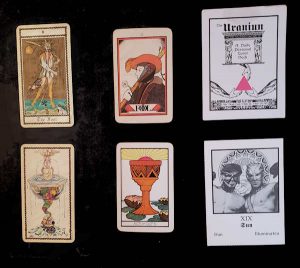 Decks Not Currently Used
These are just a few of my other decks; my most recent list of decks is on the Site Map page.

Other Oracle Decks
I don’t presently use ‘Le Normand‘ (36 cards) or ‘Kipper‘ (36 cards) decks for client readings. Visit US Games Systems for a quick overview of the differences between each of those systems and Tarot.

Beyond those systems, a wide variety of publishers offer an incredible array of decks. Some are based on historical, mythic, or literary paradigms such as First Nations (indigenous peoples of the Americas) traditions, various gods & goddesses around the globe, or beloved fictional universes. Others are focused on themes such as the Life Purposes deck below and everything from Angels to Animals (domesticated or not) to Wicca to the Zodiac.

Everything from the number of cards to the style of art (or typography if not illustrated) to meanings and suggested uses is up to the individual deck creator (and/or publisher). They can add emphasis or detail to a Tarot reading or be used for a specific question or concern suited to a specific deck. 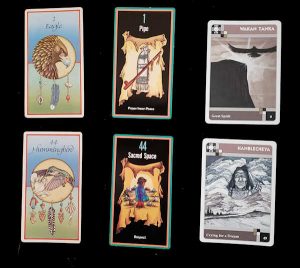 First Nations Based Oracle Decks:
Left to Right: Medicine (Totem) Cards; Sacred Path Cards; Lakota Sweat Lodge Cards.
These decks have been designed by artists of Lakota, Iroquois, Cherokee and Choctaw descent*. The last one is not currently being used for readings.

** I make no claim to have been trained or raised within those traditions and do not identify as a ‘shaman’ or ‘medicine man’. I do not represent or ‘speak for’ those traditions beyond the cards’ artwork and published First Nations traditions. 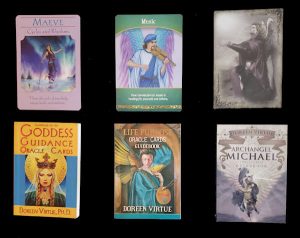 Oracle Decks by Doreen Virtue
Left to Right: Goddess Guidance; Life’s Purpose; Archangel Micheal.
Decks edited by D. Virtue with illustrations by various artists. The last one is not currently being used for readings.

These decks are the basis of my new Double Deck Spreads– using various combinations of deck paradigms to produce the most helpful reading.