12/26/2021: One of my plans for 2022 is to wrestle the demon of video into submission; still hate the sound of my voice, not thrilled to watch myself, and find editing video to be a bear, but refuse to lose. So check out Guncle Tarot on the ‘Tube to see my revised #VR response to #only10decks: Keep only 10 oracle (Tarot or non-Tarot) decks.

With the arrival of a last-minute buying decision, re-thinking how I’d work with clients, and watching a number of other #VR, I have a different selection of 10 decks than what’s shown below.

A bit of a challenge I’m sure, to pick just 10 out of my 50+ piece collection. Well, it’s more so than I first thought. I’ve learned that it’s often easier (well, less terrible) to pick just one than a small number of something; songs, decks, vacation spots… With only one picked, everyone else can believe they’re #2.

Be that as it may, I’ve made my picks.

#1 Morgan Greer Tarot
My first deck is now used only for personal readings; I bought a 2nd copy just for client work. Both were purchased in Toronto in 1980- before US Games decided to trim about 1/8″ from the width. See the right side of each card in the comparison photograph here.

The Morgan-Greer Tarot has most of the RWS symbols and similar scenes but with a different colour palette. Not exactly ‘modern’ even then; I just find M/G more relatable. Personal preference.

My then-partner had a US Games ‘Yellow Box’ (RWS) Rider/ Waite/ Smith. I connected immediately with reading Tarot- Pixie’s artwork not so much. I didn’t purchase an RWS deck until this year; see the Honourable Mentions below. 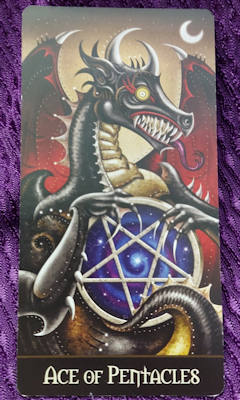 #2 Deviant Moon Tarot (borderless)
Published with a border in 2007, and borderless a few years later. I’m late to the Patrick Valenza fan club. When I moved here in 1996 I had a total of 5 Tarot and 3 non-tarot decks. Print On Demand and crowd-funding sites were barely a whisper. CafePress (coffee mugs, t-shirts) was founded in 1999, Kickstarter a decade later. Life distracts; only after being laid off from my Professional Sales Career this century did I really notice the new world of deck publishing.

A certain number of folks find Patrick’s work disturbing. Sometimes scary. I don’t; not quite humourous there’s something light-hearted or life-affirming in his world. I don’t want truly scary decks; real life has too much horror as it is.

I find reading with images from an alternate universe can make messages easier to accept. At the same time, some of my other #only10decks picks are precisely because it’s easy to see myself in them. (“Consistency is not a human trait,” Harold & Maude.) I’m a middling Patrick fan; in addition to this deck I have 1 version of his Trionfi della Luna and a version of each of 3 other Oracle decks. One or two of his others are on my ‘millionaire splurge list’. 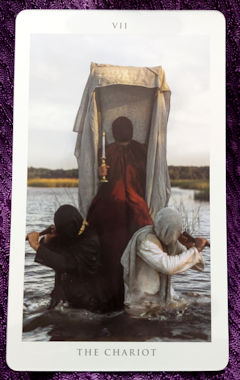 #3 Somnia Tarot
The newest (by both publication and arrival dates) on this list. Clearly I’ve only just begun working with it. From the moment I first saw some of Nicolas’ images I was intrigued. The website description of the deck: “Explore the world of Tarot through the visions of Nicolas Bruno, an artist who transforms his dreams and nightmares into surreal imagery. Each artwork within The Somnia Tarot showcases Bruno’s work within the mediums of photography, sculpture, and costume design. References are made to The Rider-Waite tarot deck along with Jungian archetypes.”

As a photographer and as someone who’s in therapy to uncover repressed memories, the images speak to me. I’ve posted elsewhere that I see why it’s not a deck for everyone. It is, on one level, an ‘Art Deck‘ – but it’s so much more. ‘Shadow work‘ is the buzz phrase for processing our darker side… that’s why I bought it and why it’s an #only10decks. 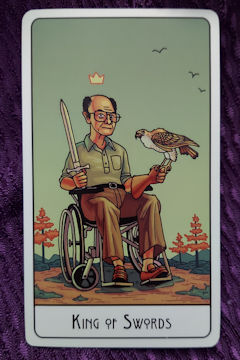 #4 This Might Hurt Tarot
One of those decks mentioned above; I can easily see myself (and folks around me) in this deck. Modern clothing, natural settings, with a great diversity of gender, ethnicity, body types. Colours are slightly muted, but not at all washed out. 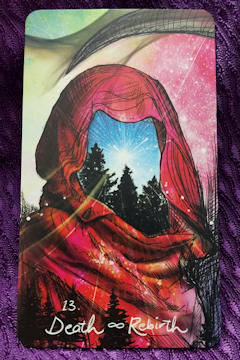 #5 Lightseers’ Tarot
Another deck illustrated with familiar scenes and people. Colours are a bit brighter than This Might Hurt. Both decks were published in 2019; modern printing allows a full range of tones and shading. Previous centuries tended to use a small range of colours in solid blocks.

I also have Chris-Anne’s The Muse Tarot (which I’m not connecting with) and their Sacred Creators Oracle– see the Honourable Mentions below.

You can buy this direct from the publisher. 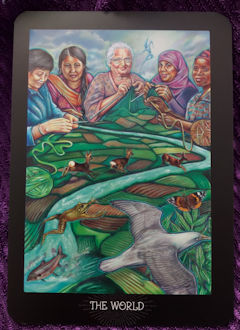 #6 Everyday Enchantment Tarot
Perfectly named, this deck is enchanting, and features modern everyday scenes. It’s set in England, but not to the point of distraction; just subtle hints like the police uniform and Royal Mail. The large cards feature colour-coded borders. Many folks trim them off; I am considering doing so as well.

You can buy this direct from the publisher. 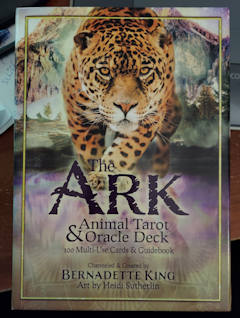 #7 The Ark Tarot and Oracle
I have a few animal-based decks in my collection. I picked this one because I love the artwork on 3.5″x5.5″ cards and comprehensive (over 300 page) guide book. A bonus is having 78 Tarot cards and almost as many additional cards; it comes with a 100 cards and I purchased the 4 add-on 12 card sets, 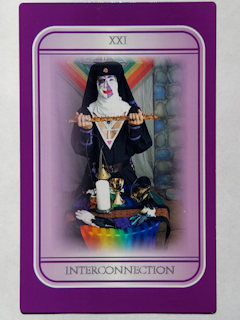 #8 Tarot of Sister Who
Yes, I helped Sister Who publish this deck. I include it here both as a meditation deck, and because I love how they replaced traditional court cards, and placed the Major Arcana journey in more physical terms than tradition.

If I really had to keep just 10 decks I might choose the Majors+ set of 38 (2.75″x3.75″) cards- the revised Major and the Minor’s court card replacements. That would allow me to add them to another standard size deck.

You can buy this direct from theGamecrafter. 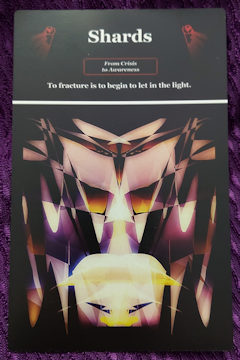 #9 Art of Awareness Oracle
This deck of 45 jumbo cards (also offered in standard size cards) doesn’t have a list of card meanings; the images and text on the cards are jumping off points.

The deck is structured as 5 suits with 9 cards each:
# From Crisis to Awareness
# Illusions
# Tools of Evolution
# Gifts of Guidance
# Transcendence.

You can buy this direct from theGamecrafter. 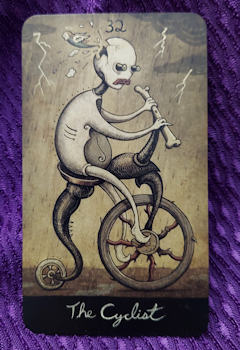 #10 Abandoned Oracle
I knew that I’d have one of Patrick Valenza’s non-Tarot decks on the list. I also have his Oracle of Black Enchantment and Mildred Payne’s Secret Pocket Oracle deck. That last one has 88 Poker size (2.5″x3.5″) cards- generally depicting just a single item. The OBE cards are large- 3.75″x6″ and quite detailed. The 52 Abandoned Oracle cards are standard Tarot size.

Many of Patrick’s decks are offered in multiple versions- some vary in size, but most have different colours or special effects added.

You can buy this deck (and his other Oracles) from the Artist. 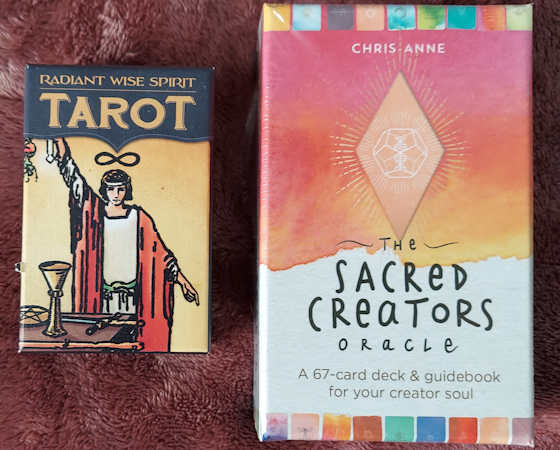 Honourable Mention: Radiant Wise Spirit Tarot
I respect the importance of Pixie’s artwork in the history of Tarot art. It’s not that I find it hideous or bad- just not to my taste. As my collection of Tarot decks approached 30 I decided I should have a deck based on her work. Between this version’s compact size, and the colouration that reminds me of This Might Hurt, it’s a perfect fit for me.

It is available in my Bookshop.org web shop.

Honourable Mention: Sacred Creators Oracle
I don’t generally vibe with ‘feel good’ decks filled with ‘positivity’ -that might well read as far more condescending than is meant. I don’t write poems about sunlight and spring flowers, and I don’t want decks that seem oblivious to reality.

But I have a life-long association with Creatives, and have a page of Creative Projects spreads for clients. I posted earlier this year about using this deck with the Light Seers Tarot in Creative Projects Double Deck Spreads.

Important Notice:
Links above to Bookshop.org are Affiliate links; I will earn a small commission should you follow them and make a purchase. Links to other websites are not affiliate links. I do earn a marketing commission for sales of The Tarot of Sister Who through The Gamecrafter.

You might notice there are no links to Amzn here. I have a post at my personal blog about why.